My last purchase from my French vacation was a Christian Dior lipstick. How could you leave Paris without something
beauté. 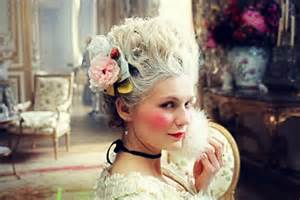 Then I started thinking about beauty products in the 18th Century. Both men and women in England and France wore cosmetics! As a matter of fact, cosmetics distinguished one as an aristocrat, and in fashion, or a la mode! Make-up was intended to look like paint, not a natural enhancement. And, typically, there was an aim to lighten the skin, as well as cover blemishes, hide defects, age, disease. In fact, "mouches" or beauty patches covered a multitude of sin, including pox marks. These little thin paper black tissues were applied right over the bad mark, later becoming known as a "beauty spot".
The face painting for the royals and other aristocrats of the French Court became kind of a formal toilette ritual, that particular courtiers were invited to view. However, cosmetics were not limited to upper society. Any bourgeois could participate. So, cosmetics began to rise in price and availability. Where the glitterati ran towards bold colors, the middle class tended toward pinks or softer tones. Rouge was applied in circular motions with fingers, rather than the brushes used today.English women were a bit more sedate, as portraiture of the 1750's and 60's indicates. They liked the more natural look, but hey, that's the Brits! The English are still best known for their country outing looks, where it's France that screams Haute couture. 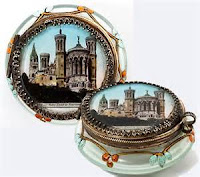 By about 1781, French women used about two million pots of rouge a year! See a typical rough pot at right!
In the 1760's, vanity tables, or Coiffeuses, become the rate, and dressing rooms were built to face north to capture the best light.

Blanc or white color could be make from bismuth or vinegar, and then veins traced with blue pencil to highlight the white. But, fashion can be a dangerous business. The white makeup that was so preferred and enjoyed was made from lead, leading to terrible accounts of lead poisoning. One famed English beauty, Kitty Fisher, died at age 23 from lead poisoning, in 1767.

Red makeup was made of vermilion, ground from cinnabar and mercury, or from creuse, made by exposing lead plates to the vapor of vinegar. These are both toxic.
But the fashion pendulum swings back and forth. What is considered fashionable one season, can be OUT, OUT, OUT the next. By the end of the 1700's, perhaps because of the Revolution, lipstick slipped out of fashion, and the painted look was relegated to actors and prostitutes. Ahh, how fickle is fashion!
Posted by Marina at 9:13 AM No comments:

Email ThisBlogThis!Share to TwitterShare to FacebookShare to Pinterest
Labels: Fashion

The Soul of the Forest

I was talking with a friend recently about my trip to Paris, and all the little luxuries that one might encounter along the way. Small indulgences that one must partake of in order to say, Yes, I

experienced Paris (or wherever) at its finest!

I found myself in a wonderful shop, Laduree, that has such things, including delicate macarons, wonderful chocolates, festively-colored Jordan almonds, and incense that gives off an aroma reminiscent of the palaces. Ahh! That was a must have, and I was all too happy to part with my last Euros! They also have Marron Glace!

Now that is something that you may like or not like, but rest assured, Marie Antoinette enjoyed! They are sweet chestnuts, and though their origin remains somewhere in the 17th Century, by 1798 they were noted in the 5th edition of the dictionary Dictionnaire de l'Académie françoise. Revu, corrigé et augmenté defined as a confit, or preserved, chestnut that is covered in caramel. In the book L'agronome, ou dictionnaire portatif du cultivateur from 1767 it reports that the best marrons came from the Dauphine region of southeastern France, and also contained instructions for preparing them.

They are an odd delicacy, and an acquired taste, but in the realms of royals, they are definitely the thing! And, they must be served in a serving piece of great dignity, and so Sevres Porcelain Factory, established in 1756, created special pieces just for the marron glaces. See below a piece with stand and cover, called the marroniere! 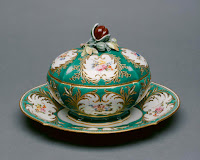 This one is dated to 1757-58. The bowl even has little piercings that allow circulation of air, helping them to keep crisp and allow extra syrup served on them to drip away. Sevre served the demands of the French Court, and when it encountered financial difficulties, by Madame de Pompadour's suggestion, King Louis XV took control of the firm to keep it going! Good thing, too, cuz you'd not like to have your marrons served up on some average crockery.

They are also known in other parts of Europe, and in Spain, for instance, they are known as the Soul of the Forest!
Posted by Marina at 12:13 PM No comments:

Email ThisBlogThis!Share to TwitterShare to FacebookShare to Pinterest
Labels: Luxuries 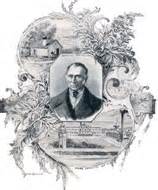 I am now back from my visit to France. It's rather difficult to sit at the desk when you have been in the company of Kings Louis, illustrious artists, and the general splendor of the "City of Lights". But, alas, C'est la vie.

On my trip, I enjoyed many glasses of French wine, including some lovely roses, new to me, and partook of Normandy's regional Calvados. But, I did not have the pleasure of trying Ricard, though it was offered on the menu of most restaurants and bars. Not being particularly familiar with it (though I recognized the name), I decided to look into this distilled beverage. And, I find the following: 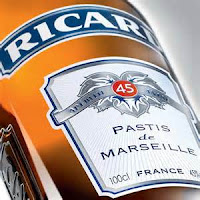 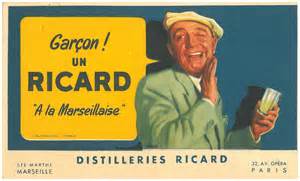 The company, formally known as Pernod Ricard was founded by Henri-Louis Pernod in 1797, opening his first absinthe distillery in Switzerland. He was of Franco-Swiss decent. He then produced Pernod Anise and Ricard Pastis, both anise-flavored liqueurs. In 1805, after absinthe was banned, Pernod founded Maison Pernod Fils in Pontarlier, Eranche-Comte in eastern France. Pernod Fils has become a worldwide conglomerate! Henri-Louis died in 1850, but his work lives on! Just one more reason to revisit Paris!
Posted by Marina at 2:07 PM No comments:

Email ThisBlogThis!Share to TwitterShare to FacebookShare to Pinterest
Labels: Lifestyle
Newer Posts Older Posts Home
Subscribe to: Posts (Atom)
This blog is dedicated to my love of the 18th Century, The Age of Enlightenment! As a matter of fact, my blog will encompass the ABC's of my favorite subjects of those times: the American Revolution, the British Royal Navy and the Classical Music as best exemplified by Wofgang Amadeus Mozart. Enjoy this blog, as I enjoy presenting my thoughts to you herein.